A few days ago  I was having dinner with my dear friends Jude and Dan and whilst solving the problems of the world we hit upon the subject of fancy-pants names.   Have you ever noticed that sometimes things that are out of date suddenly become new, sometimes just with the change to a fancy name? This happened to a suburb of Perth called Balga, that became like new when it was renamed Westminster a few years ago.  To me it conjures up images of the Queen and palaces and is infinitely more poshish.  So I guess I shouldn’t have been surprised to find that a a simple grain that I learn’t about in uni a few years back has had its moniker altered too.  I am referring to good old Quinoa, a crop that originates in South America and was held sacred by the Inca’s, in fact they called it ‘mother of all grains.’  Quinoa is actually a pseudocereal rather than a true cereal or grain and it is closely related to beets, spinach and tumbleweeds. Yum. Quinoa has a very high protein content and like oats, it contains a balanced set of essential amino acids (building blocks of protein) for humans making it an unusually complete protein source in the plant world.  Quinoa is gluten free, a good source of fibre and a source of iron (although the iron is not easy to absorb) and magnesium. My first taste experience with Quinoa was at a picnic on the shores of the the Swan River. It was part of a tabbouli like salad and it was no taste sensation. Thankfully Jude has come to the rescue via a cookbook written by Michelle Bridges of the Biggest Loser fame.  She claims to have found the answer to enjoying Quinoa in the form of Quinoa Porridge with Cranberries and Raisins which I will share with you right now. 3/4 cup quinoa, rinsed and drained 500ml water 375ml low fat milk 1/3 cup dried cranberries and 2 tablespoons raisins 1/4 cup chopped walnuts Combine the quinoa and water in saucepan and bring to the boil.  Reduce the heat to medium-low and cook, covered for 10 minutes.  Stir in 1 cup of the milk and the dried fruit and nuts.  Cook, covered, for another for another 10 minutes and then stir in the remaining milk. I will embark upon the porridge this week, complete with a report and would love to know if anybody else gives it a try. So when, Jude and I proposed, did Quinoa become Keeen-Waaaa? Ok, so I am exaggerating a little.  The food is known as quinoa in English but the spelling and pronunciation differs depending on the region in South America.    In some parts it is known as ‘kinwa’ or ‘keen-wah’ or ‘kwi-NOH-a.’  I don’t care, I am sticking to Quinoa.  Its not fancy or trendy but hello, its just a pseudocereal.

The Groats and the Oats

How to Make Raspberry Rough Bliss Balls – they are the bomb

Looking for a quick dinner? 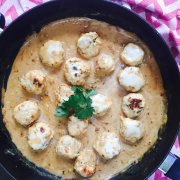 Camel milk and the health benefits – one hump or two?
2 replies

Coffee – what about it?