Blog - Latest News
You are here: Home1 / Cleats and All This week I have had the privilege of working with a very inspiring team of fourteen cyclists who took off this morning from Albany on the south coast of Western Australia in their quest to make it back to Perth in 4 days.  That means 619km. The distance covered each day varies between 135km up to 196km and no doubt it will be tough.  These students from Swan Christian College were invited to be part of this journey 4 months ago and leapt at the opportunity although some of then had never ridden a bike seriously before.

These teenagers, with a handful of experienced adult cyclists are raising money to educate and feed underprivileged children in the village of Kantolomba in Ndola, Zambia.  The schools fundraising efforts have already enabled the construction of a school for the 350 children in the village and now they are on a cycling adventure to build infrastructure for sewerage and water.

The youngest cyclist is 13 years old and he was pumped.  The whole team needed some creative nutrition advice for before, during and after the event and a not so gentle reminder that time is of the essence when preparing for an endurance effort.   Recovering is not just about having a lie down on the floor either and actually requires a strategic plan in the first 15-30 minutes following any physical activity.

The team will be stopping every 40km for a fuel break and they are being ably supported by Pam who is administering all petrol before, during and after the ride.  What you eat and drink is essential not just for maintaining energy and performance but is vital for concentration and skills on the bike.  Pretty important when you are cycling in a peloton and one cog in a machine that needs to keep moving on schedule. Snacks and the environment – what do they have in common? 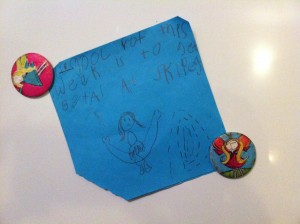 Get Better at Skippy The Fourth Day of Christmas – With A Healthy Twist
2 replies